There were 53 entries in total.

Full scores of all sections here.

We added Jack to the Under 7s to make up an even number. The young children displayed excellent powers of concentration all day.

Fresh from winning the SW England U9 championship, favourite Adam Hussain reached a perfect score. He has added more care to his attacking style and was scarcely in trouble throughout. The best game was the narrow victory by Ollie over Celeste, giving him 2nd place overall. Celeste, last years U9 winner, had the toughest draw and emerged with credit as usual.

A comfortable victory by Harvey despite dropping a draw to his school friend and rival Josh. Errors by the others meant they could not keep up with him.


A fine performance by Thomas, who has played for several years now, improving all the time.


Richard proved much the strongest player, demonstrating the value of having played in adult competitions. His rivals have lots of talent and, with practice, will surely soon play for club teams.

At this annual event, held at Swindon on 21 and 22 February and featuring many strong juniors from outside the region, Adam Hussain (Truro Prep) was the top-scoring West of England player in the Under 9 section and is therefore the new West of England Under 9 Champion. Congratulations to Adam on this fine result from one of our most promising juniors.

Adam (Truro Prep) won the London Junior U10 qualifying event at St. Albans on 6th December, scoring 5/6. As he is not yet 9 this is a promising achievement. He faces a tough challenge next weekend, playing in the London Major U10.

At the London Chess Classic, which was held at Olympia from 6th to 14th December Theo was one of 405 players in the 10 round rapidplay open which featured many GMs (including the six elite players) and IMs. In round 1 the six elite players were each paired against a junior. Theo took on Hikaru Nakamura from the USA, the world no. 1 blitz player, putting up impressively stiff resistance against his powerful opponent. The game is here. He finished on 4½/10. In the strong FIDE Open which followed he scored 3½/9

Report and interview in the North Devon Journal 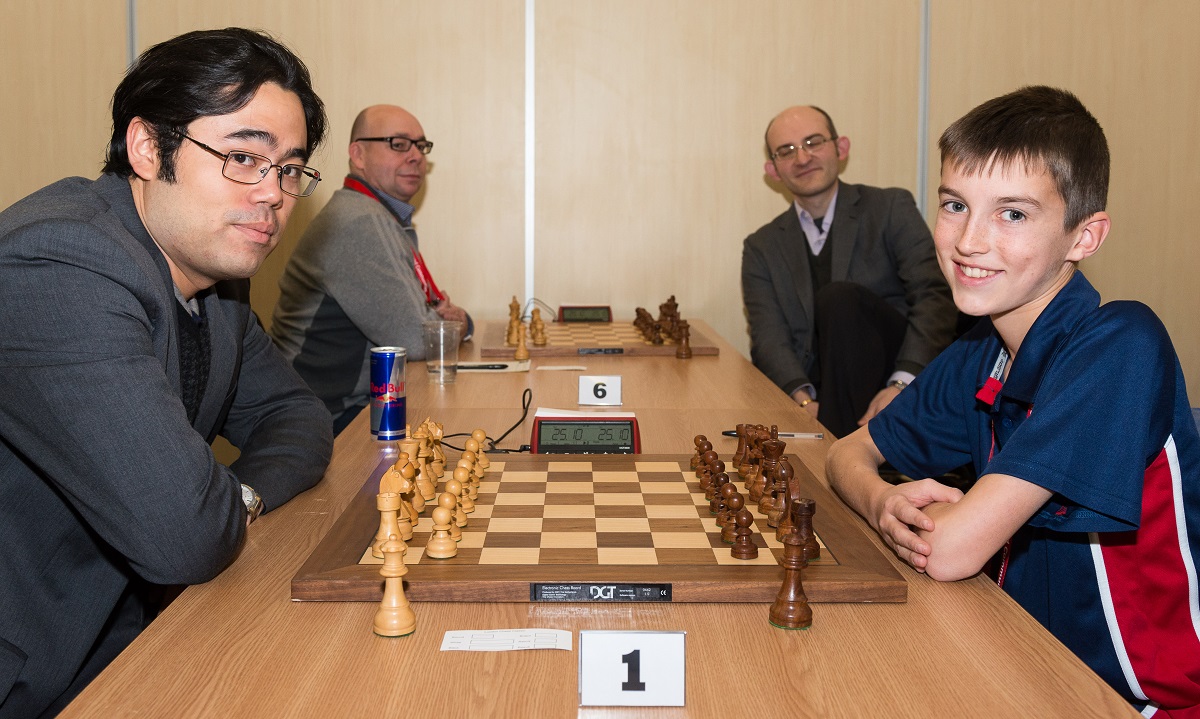 Theo Slade with Hikaru Nakamura at the 2014 London Chess Classic

The inter-school team cup was won by Marazion School whose 4 highest-scoring players reached 20½ points out of a possible 24. Second place went to Trythall with 18, ahead of Truro Prep 15, Constantine 12 and Truro High10½